What color are your eyes exactly?

When someone wants to enhance their vision, they may try contact lenses or seek out LASIK eye surgery. But what if they want to change the color of their eyes? People have long been fascinated with eye color; after all, eyes come in a wide range of shades. Exactly what color are your eyes? Hazel-ish? Blue-gray-green? Blue with brown spots? Green with gray spots? Most of us are taught in high school biology that two blue-eyed parents are guaranteed to have blue-eyed kids, but it’s not that straightforward. The genetics of eye color is very complicated. All blue eyes are not created equal because eye color is determined by many different gene combinations, as seen in the image below:

The colored part of the eye is called the iris. The iris has pigmentation that determines the eye color. Irises are classified as being one of six colors: amber, blue, brown, gray, green, hazel, or red. Often confused with hazel eyes, amber eyes tend to be a solid golden or copper color without flecks of blue or green typical of hazel eyes. 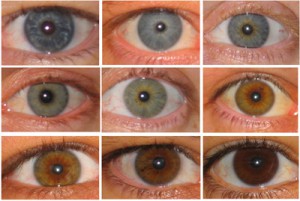 Blue eyes have a low level of pigment present in the iris. Recently, scientists announced that everyone with blue eyes is related! Because of various racial groups intermarrying, blue eyes, which are generally recessive, are becoming rarer and rarer. (Note: I recently asked my blue-eyed in-laws how they produced my amber-eyed spouse, incorrectly telling them it was genetically impossible. Lesson #381: it’s not funny to suggest your mother-in-law was unfaithful.)

Brown is the most common eye color. Individuals with brown eyes have more melanin present, and over half of the people in the world have brown eyes.

Gray eyes may be called “blue” at first glance, but they tend to have flecks of gold and brown. And they may appear to “change color” from gray to blue to green depending on clothing, lighting, and mood (which may change the size of the pupil, compressing the colors of the iris).

Green is the least common eye color, but it is found most frequently in northern and central Europe. I have always incorrectly called this color eye hazel!

Hazel eyes mostly consist of shades of brown and green. Much like gray eyes, hazel eyes may appear to “change color” from green to light brown to gold. Individuals whose eyes appear to be one color closest to the pupil, another color a little farther our, and another color around the edge of the iris are likely to have hazel eyes.

Red eyes do exist. “Red?” you say. “Yes, red,” I say, although we often call them pink. Picture white bunnies with pink eyes. What you’re actually seeing in these rabbits and in albinos is the blood vessels behind the iris. Because there is so little melanin in the eyes, there is nothing to conceal the blood vessels hard at work. These red eyes are different from the red eyes you sometimes see in photographs when a flash is used. The red you see in pictures is a reflection of the flash off of the back of the eye, which is filled with blood vessels. 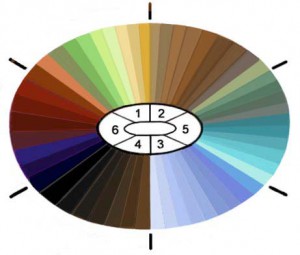 If you’re dissatisfied with your eye color for whatever reason, there are always colored contacts. Just be sure to get a prescription for them from your eye doctor at Eye Doctors of Washington. Don’t buy them online or borrow them from a friend—you’d just be begging for an eye infection.

Pediatrics
Back to Top