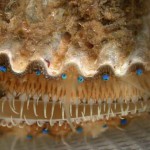 Fun Facts About Eyes:
The eye of a human can distinguish 500 shades of the gray.

The cornea is the only living tissue in the human body that does not contain any blood vessels.

Sailors once thought that wearing a gold earring would improve their eyesight.

Babies’ eyes do not produce tears until the baby is approximately six to eight weeks old.

The reason why your nose gets runny when you are crying is because the tears from the eyes drain into the nose.

Some people start to sneeze if they are exposed to sunlight or have a light shined into their eye.
It is impossible to sneeze with your eyes open.

Dolphins sleep with one eye open.

Horned toads squirt blood out of their eyes when they’re angry.

5% of animals don’t have eyes.

As seen in the picture above, a scallop has 35 blue eyes.

Honeybees have hair on their eyes.