Posted by Eye Doctors of Washington in LASIK, Practice News 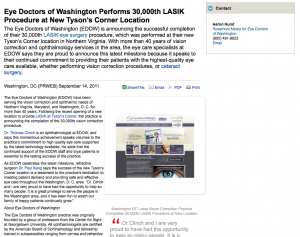 The Eye Doctors of Washington (EDOW) is announcing the successful completion of their 30,000th LASIK eye surgery procedure, which was performed at their new Tyson’s Corner location in Northern Virginia. With more than 40 years of vision correction and ophthalmology services in the area, the eye care specialists at EDOW says they are proud to announce this latest milestone because it speaks to their continued commitment to providing their patients with the highest-quality eye care available, whether performing vision correction procedures, or cataract surgery.

The Eye Doctors of Washington (EDOW) have been serving the vision correction and ophthalmic needs of Northern Virginia, Maryland, and Washington, D. C. for more than 40 years. Following the recent opening of a new location to provide LASIK at Tyson’s Corner, the practice is announcing the completion of the 30,000th vision correction procedure.

Dr. Thomas Clinch is an ophthalmologist at EDOW, and says this momentous achievement speaks volumes to the practice’s commitment to high quality eye care supported by the latest technology available. He adds that the continued support of the EDOW staff and loyal patients is essential to the lasting success of the practice.

As EDOW celebrates this latest milestone, refractive surgeon Dr. Paul Kang says the success of the new Tyson’s Corner location is a testament to the practice’s dedication to meeting patient demand and providing safe and effective eye care throughout the Washington, D. C. area. “Dr. Clinch and I are very proud to have had the opportunity to help so many people. It is a great privilege to serve the people in the Washington area, and it has been fun to watch our family of happy patients continually grow.”

The Eye Doctors of Washington practice was originally founded by a group of professors from the Center for Sight at Georgetown University. All ophthalmologists are certified by the American Board of Ophthalmology and fellowship trained in subspecialties ranging from cornea and refractive surgery, glaucoma, pediatrics, and strabismus. Additionally, all of the doctors have been directors of fellowship training programs, and have received numerous awards and honors from organizations such as the American Academy of Ophthalmology.