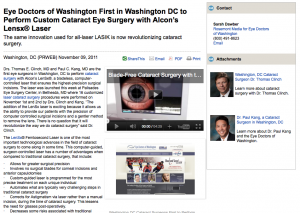 Drs. Thomas E. Clinch, MD and Paul C. Kang, MD are the first eye surgeons in Washington, DC to perform cataract surgery with Alcon’s LenSx®, a bladeless, computer-controlled laser that ensures the highest-precision surgical incisions. The laser was launched this week at Palisades Eye Surgery Center, in Bethesda, MD where 16 customized laser cataract surgery procedures were performed on November 1st and 2nd by Drs. Clinch and Kang. “The addition of the LenSx laser is exciting because it allows us the ability to provide our patients with the precision of computer controlled surgical incisions and a gentler method to remove the lens. There is no question that it will revolutionize the way we do cataract surgery” said Dr. Clinch.

The LenSx® Femtosecond Laser is one of the most important technological advances in the field of cataract surgery to come along in some time. This computer-guided, surgeon-controlled laser has a number of advantages when compared to traditional cataract surgery, that include:

LenSx utilizes a femtosecond laser, which has been used to perform LASIK surgery since FDA approval in 2001, and offers an alternative to the mechanical cuts used in traditional LASIK.
“Having a LASIK practice, we have seen the benefit of the advances in laser technology through the years. The transition from using mechanical cuts to all-laser LASIK brought both safety and precision to the procedure. Our expectation is that LenSx laser will similarly bring increased accuracy and precision to cataract surgery, which is already a safe and successful procedure.” Said Dr. Kang.

Dr. Thomas Clinch graduated from Cornell University and earned his medical degree with high honors from Jefferson Medical College. He then completed his ophthalmology residency at the prestigious Wills Eye Hospital, as well as a fellowship in cornea and refractive surgery at the Louisiana State University Eye Center. Dr. Clinch is a prolific author, having published more than 100 scientific articles and presentations. He has truly been a pioneering ophthalmic surgeon and was the first in our region to implant the Intraoperative miniature telescope for macular degeneration, phakic intraocular lenses for highly nearsighted patients, Intracorneal inlays for farsighted patients, multifocal intraocular lenses and LenSx for cataract surgery, and was involved in FDA trials for the approval of LASK. He has served as a present of the Washington Metropolitan Ophthalmology Society and was honored with an Achievement Award by the American Academy of Ophthalmology. He has been named to “Top Doctors” by Washingtonian Magazine, Super Doctors by the Washington Post, as well as received many other honors.

[1] Vision Problems in the U.S. report, developed by the National Eye Institute and Prevent Blindness America, 2002. Retrieved on 9/27/2011 from aao.org/newsroom/press_kit/upload/Eye_Stats_3-5-07.